"This site contains affiliate links to products. We may receive a commission for purchases made through these links."

Calvin Klein is arguably the most popular manufacturer of clothing in the world and for good reason. Since it was established by its eponymous founder in 1968, the label has been on the forefront of design and innovation and regularly utilizes the latest technological developments in the garment industry to ensure it continues to give the fashionistas of the world clothes they can be proud to wear.

One of the most popular Calvin Klein products of recent memory are their Non-Iron Herringbone Dress Shirts, but is its popularity justified? 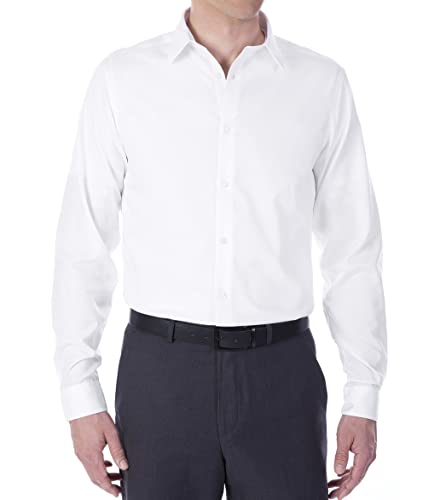 As you likely guessed from its name, one of the major selling points of the Calvin Klein dress shirt is that it can be worn straight from the dryer. Some people may feel such convenience is too good to be true, but those who have purchased the shirt have rarely reported it being anything less than as advertised.

It's composed of 100% cotton and comes in 17 different colors and a dozen sizes, so you’ll almost definitely be able to find the style for you.

Who's this product for?

Because Calvin Klein Herringbone mens no iron dress shirts don't have to be ironed before they can be worn, they're a great choice for busy men who don’t have the time to iron their clothes every morning. Because it's the product of one of the most respected designers in the world, this shirt will appeal to those who feel under dressed unless they're wearing something from a recognized brand.

As a consequence of their popularity, however, these no iron dress shirt sell for significantly more than the average men's dress shirt, so those who are trying to outfit themselves on a budget will have to look elsewhere.

The Calvin Klein dress shirts include nothing but cotton in its composition, which means it can be washed in the average washing machine without any problems. The designer included adjustable barrel cuffs with this shirt, so you’ll be able to alter your sleeves for style and comfort at your convenience.

It should be noted, however, that the black necktie frequently featured in Calvin Klein’s advertisements for this dress shirt does not come included with it and must be purchased separately should you wish to recreate the look.

Among the many stylish features of this dress shirt is a point collar, which looks just as good with a necktie as it does unbuttoned and open. It also boasts a shirttail hemline, which will ensure the shirt remains tucked into your trousers, eradicating the risk of you looking scruffy after a bathroom break.

One of the things we love about dress shirts is their remarkable versatility. A dress shirt can be paired with anything and this one is no exception to the rule. If you're planning on wearing this shirt to work, we recommend going with the white color option and complimenting the point collar with a skinny necktie to put a modern twist on an old favorite.

If you’re looking for something a little more casual, however, try one of the bolder colors this dress shirt is available in. When worn with a nice pair of jeans and some loafers (and maybe accessorized with a watch or ring), the Calvin Klein Non-Iron Herringbone Dress Shirt is perfect for a night on the town.

If, for whatever reason, you can’t imagine yourself happily throwing on your Calvin Klein shirt at the start of the day, we recommend you try the Muse Fath Men’s Printed Dress Shirt instead.

Muse Fath isn’t a particularly well-known brand, but its clothes are flawlessly designed and the Men’s Printed Dress Shirt is evidence of that. Generally sold in the $20 range, this shirt boasts a point collar, convertible cuffs, and 100% cotton composition.

At the beginning of this article, we asked if the popularity of the Calvin Klein shirt is justified. It may ultimately come down to a matter of opinion, but we believe the hype surrounding this men's wardrobe essential is most definitely justified.

Although it may cost a little bit more than most would like to spend, with the Calvin Klein Non-Iron Dress Shirt you get a product from an industry juggernaut that is flawlessly designed and equally flawlessly executed. This shirt’s versatility means it will adapt to changes in fashion, so you can be certain you’ll get years of wear out of it.

Last Updated on December 19, 2021 by admin_comfortabledressshoes

Some recommended products may use affiliate links. ComfortableDressShoes.com is a participant in the Amazon Services LLC Associates Program, an affiliate advertising program designed to provide a means for sites to earn advertising fees by advertising and linking to Amazon.com. Amazon and the Amazon logo are trademarks of Amazon.com, Inc or its affiliates.