Finding the best men's dress belt is vital to get the right look for your outfit. Dress belts are not only practical, but they're also a fantastic accessory that enables you to add a little customization and flair to your finished look.

When investing in a good leather dress belt, it's important to consider a few factors to ensure that the belt you choose will not only last you for years to come but also be one that will work with many different outfits. The material that the belt is made out of is important to ensure it withstands the test of time and offers more usability and functionality.

Another thing to consider is the style and overall look of your belt. Do you want it to be purely functional to help keep your pants up? Or are you looking for something that will add a little extra flair to your outfit? For that, we’ve got you covered.

To help you pick the right one, we've compiled a list of what we consider to be five of the best men's belts on the market. 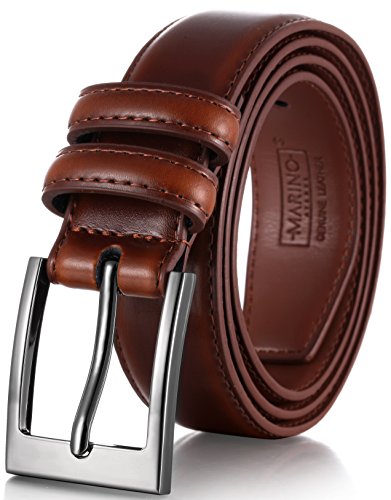 This belt by Mio Marino is a great option for those looking for a practical yet sleek design. This dressy belt is not too flashy but is sophisticated and adds a low-key statement look to any men's outfit.

It's available in a variety of different colors, so you have the option of picking which one will compliment your wardrobe best.

This Mio Marino brand belt is a great option for any man because of its many appealing features. It's made out of durable leather, so it will hold up for daily usage quite well. We love the fact that it is hand-washable, which means you can take good care of it at home and keep the leather clean and sharp.

Because it's a low-key, understated belt, it can be teamed with many different stylish men's outfits and can be used for many different events, both smart and casual. This makes it extremely versatile, which is great for people looking for one belt to suit a variety of different wardrobe choices.

This belt buckles with just a single prong, making it very easy to use and undo. With its simple design, no one should have any problems with its operation.

The Mio Marino company offers a 30-day free exchange or money-back guarantee, allowing you the option of returning it if you don't like the way it looks or feels.

This men’s belt is a great, quality product made with long-lasting leather. The single prong buckle is simple yet elegant and is sure to compliment any outfit.

This is a slim belt for men and comes in a variety of colors. The satisfaction guarantee makes this purchase a safe investment too. Just be careful about choosing the size because this belt runs somewhat smaller than some other brands. 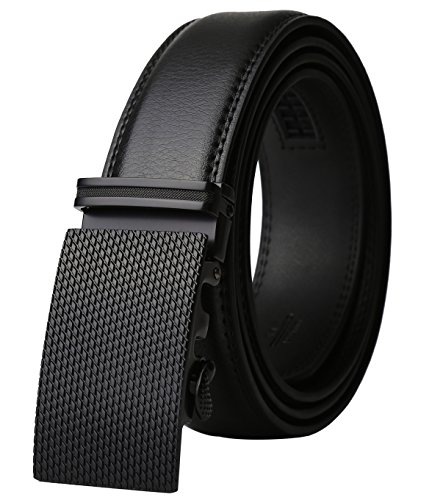 This rachet dress belt has a unique style, and instead of a prong buckle, it's clamped with a ratchet style buckle. For this reason, it is super customizable, which makes it a perfect accessory to any outfit.

This is not your classic style belt, but it's this uniqueness that draws some people specifically to it.

This model can be customized to fit any body type because it doesn't have any holes. This means that it can be adjusted to suit any particular waist size more perfectly than other men's belt styles with the classic hole format.

It can also be trimmed to size, so you don’t end up with a bunch of excess belt hanging off the end. It comes with instructions on how to trim it properly, which is very important to read and thoroughly understand because the last thing you want is to cut your belt too short, rendering it useless.

The ratchet feature of this belt means that there are 38 different adjustments you can have while wearing it. It's also quite secure because the ratchet mechanism means that the buckle will not move out of place. This ratchet style also makes it easy to undo. Instead of having to undo a bunch of prongs and holes, you simply slip the buckle open, and the belt slides off.

The face of this belt is very bold, and the black color has been known to scratch somewhat easily. It's a very inexpensive belt, though, so if you're not concerned about a few minor scratches, this shouldn’t be a big issue.

The bulkiness of the face of the belt adds to its security in keeping it on but also contributes to making it look a bit bulky, which may not suit everyone’s taste. It's a very modern design, though, which has made it a popular choice for many.

The style of this belt should be considered as it isn’t your typical classy-looking belt. If you're looking for a belt to suit more formal, classic occasions, this one might be a bit too one-dimensional.

This is a great belt for someone who's looking for a sleek, modern-style dress belt. It's easy to operate due to its ratchet style buckle and clasp mechanism.

The fact that it has so many adjustment settings is perfect for people who tend to have weight fluctuations or want a belt they can wear for many years.

The only issue with this is that the buckle face can scratch easily. Nevertheless, the other awesome features still makes it a great choice. 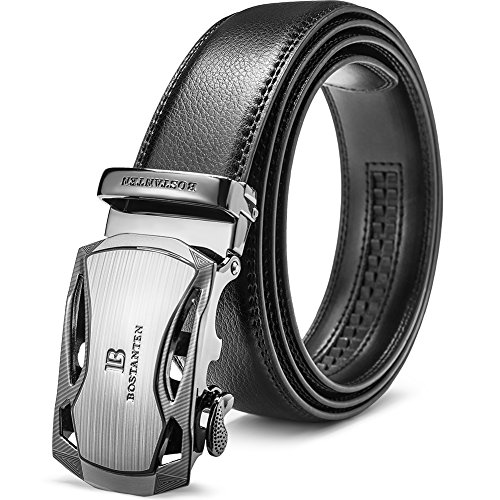 This popular belt is made with quality leather that has recently been improved to ensure the finest fit and design. It uses a classic ratchet clasp belt buckle, which is stylish and practical and lends its entire look to be more modern and sleek.

The buckle is also attractive and will draw attention to this belt’s presence, finishing your men's outfit with confidence.

This unique belt is made out of cowhide leather, which means that it's of a great quality that will stand up. The cowhide leather is also very attractive and compliments any outfit exquisitely.

This particular design is an enhanced model, so some interesting improvements have been made to respond to customer preferences. For instance, the buckle has been changed to a ratchet style, which is an efficient and effective way of securing this belt to accommodate all waist sizes better.

This belt allows you to trim it to fit your specific body size. To ensure the perfect fit, the company recommends that you buy a size larger than your waist. For this reason, it's important to know your exact waist size before purchasing.

The design is very modern and sleek, so it's great for dressy occasions. It's also excellent for finishing off a smart-casual look with a statement accessory. The buckle itself is metal, which adds a nice texture and color change against the leather belt strap.

If you're inclined to a more understated look, then you’re in luck as the buckle is also removable. This means that you can switch up your look while keeping the same belt strap.

This belt is great because of the removable aspect of the buckle. However, the buckle provided is quite bulky, and while it makes for a great statement look, it may not suit everyone's tastes.

This is fine if you want to dress in a way that stands out from the crowd, but it can be considered a bit too much for some if you're just looking for a belt to wear to work. Still, the ratchet option is very popular and makes for versatile operation. 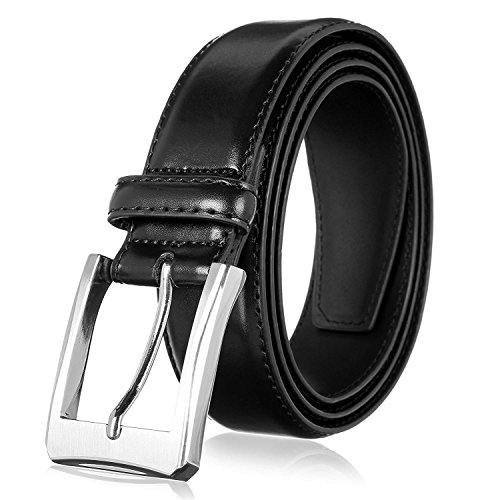 This belt is unique and understated but can be dressed up for any occasion. It's perfect for those who don't want a super flashy belt but want to be able to use it in a variety of different circumstances.

This dress belt is handmade with the highest quality leather, making every model unique in its creation. KM stresses that its products are made by the finest of craftsmanship, and each belt is assessed to ensure maximum durability.

KM Legend brand features double-edged stitching, so you can be confident they won't fall apart or break easily even after years of use.

This belt is designed in a classic way, with a single prong buckle. It's a traditional look, which is nice for everyday use for men who want something that will suit many different outfits. It's quite a slim belt, so it will add understated detail to all types of dress pants and will not detract from other aspects of your style or outfit.

This company also provides a 100% customer satisfaction guarantee. This means that if you're not pleased with the product, the company will either refund you or send you a new product.

We love this product. The leather is of high quality, which is guaranteed not to break. It's a simple design but can be dressy if necessary. The buckle is not too bulky, and the simple one prong clasp is easy to operate. 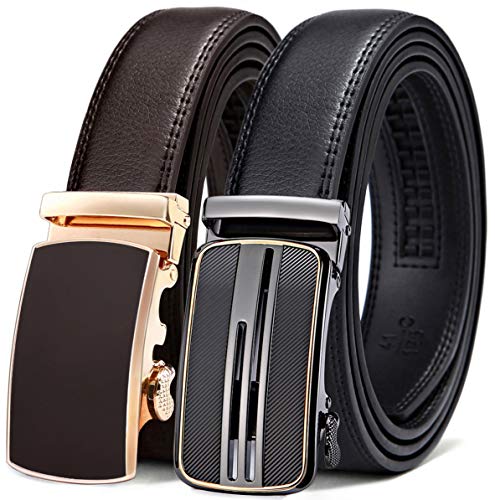 This product comes in a two-in-one package, which means you get two belts for the price of one. This gives you the opportunity to customize your look for daytime and nighttime.

Both belts are equipped with modern buckles, which can add a stylish touch to all your outfits. They're great for all kinds of occasions, being dressy enough for classy events but casual enough for daily outings such as social events with friends or family functions.

This product comes with two belts, both with ratchet-style buckles. This is great because each belt is slightly different, allowing you to mix and match the buckles with the belt strap to customize your look.

Each belt has no less than 32 adjustment options, so you can be sure it will fit perfectly to your waist size and body shape. These belts are affordable too, but unfortunately, the quality of the leather is lacking compared to some others on the market.

The face of the belt buckle is scratch-proof, so you don't have to worry about your buckle losing its shine. Both buckles have a very modern design, which works perfectly for men who like to keep up with the times, but not so great for those looking for something more understated and classic.

Like the other ratchet-style belts on this list, you have the capability of self-trimming this belt so you can ensure that it fits perfectly. As with any belts with this option, it's important to make certain you don't cut it too small, so always follow the instructions when making the adjustments.

There's also a customer satisfaction guarantee that comes with this purchase. This means that if you aren't happy with it, they'll either give you a refund or send you a replacement depending on your preference.

These are great belts for those who want a sophisticated product but are on a budget. The buckle is a ratchet-style buckle, which offers customizable sizing that's very easy to operate on a day-to-day basis.

The customer satisfaction guarantee is a great perk, which should put customers at ease when buying this product.

There are many attractive belt options on the market; however, in our opinion, the winner of the best men's dress belts for your money is the KM Genuine Brand Leather Belt. We love the simplicity of the design that allows the wearer to compliment any outfit with effortless style.

While the ratchet-style buckle is very popular, it can prove to be a little flashy for some, especially when it comes to more formal events. For this reason, we stand by the single prong buckle. The KM belt also has the highest grade of leather, helping to ensure it will last longer than other belts at its price point.

Some recommended products may use affiliate links. ComfortableDressShoes.com is a participant in the Amazon Services LLC Associates Program, an affiliate advertising program designed to provide a means for sites to earn advertising fees by advertising and linking to Amazon.com. Amazon and the Amazon logo are trademarks of Amazon.com, Inc or its affiliates.